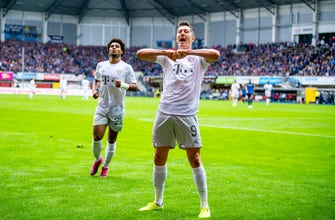 COLOGNE, Germany (AP) — Substitute Vedad Ibisevic scored two goals with his first two touches of the ball in Hertha Berlin’s 4-0 rout of 10-man Cologne in the Bundesliga on Sunday.

Hertha was given a helping hand by VAR when Cologne defender Jorge Meré was sent off minutes before the break. Referee Sören Storks had shown Meré a yellow card for a late challenge on Vladimir Darida, but changed it to red after consulting video replays.

Cologne had made a good start but Javairo Dilrosun scored against the run of play in the 23rd minute.

Ibisevic came on for Davie Selke in the 57th and scored a minute later, five minutes before he grabbed his second goal with his next touch.

Belgian defender Dedryck Boyata completed the rout with his first Bundesliga goal in the 83rd as Hertha climbed to 10th and left Cologne in 17th place after six rounds.

Both teams posed together for a photo before the game to mark “Diversity Day,” while Cologne players also wore jerseys that had the sponsor’s name in rainbow colors.

Bayern Munich capitalized on Leipzig’s first defeat of the season to move top on Saturday, just ahead of five teams on 13 points including Freiburg and Leipzig.