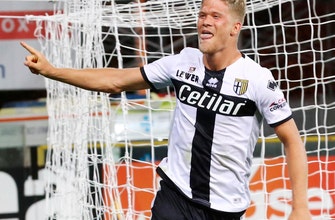 PARMA, Italy (AP) — Parma recovered from a missed penalty and a first-half deficit to beat 10-man Torino 3-2 in Serie A on Monday.

Dejan Kulusevski put Parma ahead inside just 90 seconds when he bundled in Gervinho’s cutback. It was a first Serie A goal for the Swedish teenager, who is on loan from Atalanta.

Torino’s chances of getting something from the match diminished when defender Bremer was shown a second yellow card and sent off with more than an hour remaining. But Salvatore Sirigu saved Gervinho’s penalty and 10-man Torino took the lead two minutes from halftime when Andrea Belotti converted from the spot after he was fouled by Vincent Laurini.

There was still time before the break for Andreas Cornelius to level for Parma with a powerful strike into the roof of the net.

There were fewer chances in the second half and, just as it looked as if the match was going to end in a draw, substitute Roberto Inglese managed to convert Gervinho’s cross.