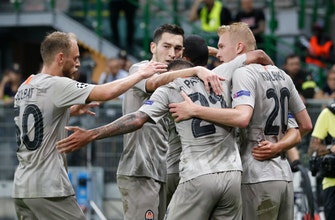 MILAN (AP) — Atalanta players collapsed to the floor in agony as the entire Shakhtar Donetsk bench ran to engulf scorer Manor Solomon and the team in an ecstatic embrace.

Atalanta had been on the brink of a historic point but Solomon scored with practically the last kick of the game to help Shakhtar win 2-1 Tuesday as the Italian side’s first home match in the Champions League ended in defeat.

“A goal that ruined a whole match, a night which was magical until the last five seconds,” Atalanta goalkeeper Pierluigi Gollini said. “I think we had a great game which obviously was then ruined and overshadowed by this defeat.”

Atalanta had an early penalty saved while both sides also hit the woodwork in a match that saw Junior Moraes cancel out Duvan Zapata’s opener for Atalanta in the first half, before substitute Solomon netted in the fifth minute of stoppage time.

It was Solomon’s first goal in European competition and the Israel defender said he was so surprised to score that he was unsure how to celebrate.

“I became really excited, I didn’t know what to do with myself because it was a really important goal and to score in Champions League it’s something really extraordinary,” the 20-year-old Solomon said with a laugh.

Next up for Atalanta is the daunting prospect of two matches against Manchester City, which beat Dinamo Zagreb 2-0 in the other Group C match.

“It will be difficult but anything can happen in football,” Atalanta defender Timothy Castagne said. “I think we have to go there and give it our all, as we did today.

“It will be much more difficult but we always play better against such big teams.”

While it was Atalanta’s first home match in the competition, it took place at Milan’s San Siro, around 60 kilometers from Bergamo as Atalanta’s stadium is currently being renovated in order to meet UEFA standards.

La Dea was recovering from a chastening debut in Europe’s premier club competition, having lost 4-0 at Dinamo. Shakhtar opened its campaign with a 3-0 defeat to City.

Atalanta had a great chance to take the lead in the 16th minute when Josip Ilicic went down under Serhiy Kryvtsvov’s challenge and a penalty was awarded on video review.

However, Ilicic’s spot kick was parried by Andriy Pyatov and Hans Hateboer fired the rebound into the sidenetting.

Atalanta had to wait 12 minutes longer for its first goal.

Mario Pasalic’s effort came back off the right post but the move continued and Hateboer whipped in a cross for Zapata to head in at the back post.

Atalanta withstood a lot of pressure but Shakhtar found a way through four minutes before halftime when Alan Patrick’s through ball released Moraes, who raced clear and rounded goalkeeper Pierluigi Gollini before slotting into an empty net.

Shakhtar nearly took the lead before the break, but Marlos‘ free kick crashed off the crossbar.

Zapata had several good chances to double his tally but he fired narrowly wide from close range and had another good effort saved by Pyatov.

Atalanta pressed hard for the winner but ended up losing to a last-gasp counterattack as Dodo rolled the ball across for Solomon to beat Gollini.